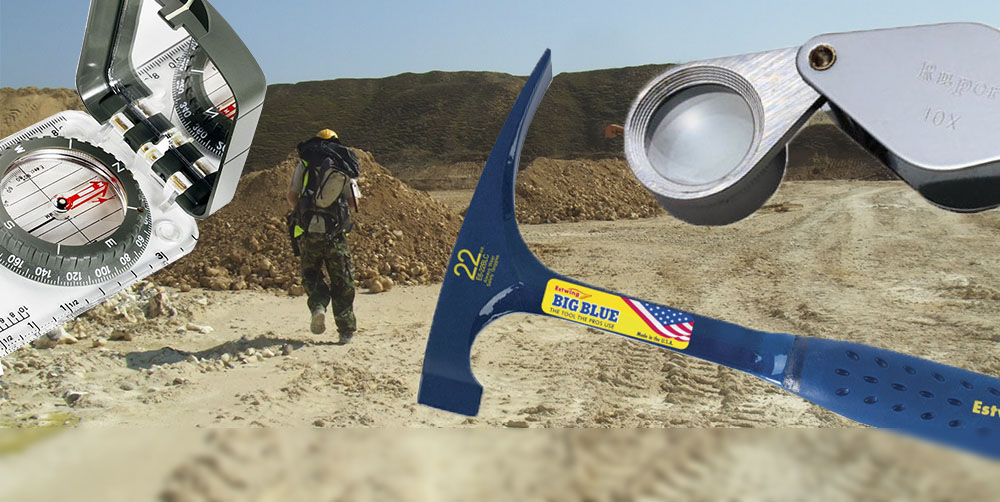 The Old and New Tools Used in Geoscience

The word geology literally means the study of Earth, its composition and structure. There are different fields of geology and each field bears its own specific tools and equipment. Normally, geologists used to carry some important tools along with them in the field which are:

There are number of different geological (magnetic) compasses available on the market. These are for studying the pattern of different stratigraphic rocks as they have been mapped in the field. They are used to document and report the geometry and kinematics of bedding, joints, foliations and lineations. In this respect, the most common tool used now days is an analog compass.

There are different types of geological compasses which are given below:

b)     Modern Geological Compasses and

These compasses use the combination of two functions (direction finding and navigation) especially while mapping the rocks and structural features in remote areas). These are also used to find the dip and strike of different rocks. These can be plotted on a map. This will show the geological features like folds (syncline and anticline) and faults. These compasses are widely used by structural geologists for finding the plunge and plunge direction of foliations and folds, etc. Common examples of classical geological compasses are Brunton Compass and Silva Compass. The Brunton Compass is specifically known as “Brunton Pocket Transit”. This instrument was originally launched in 1894 by a Canadian-born geologist named David W. Brunton. It’s the standard compass that most are familiar with.

Eberhard Clar of the University of Vienna discovered his concept of modern geological compasses during his field work as a structural geologist. He officially published his concept in 1954. The advantage of using this compass is finding the dip and strike in a single step by using a vertical circle for dip angle and the compass for the strike direction.

Nowadays, with the help of smart phones, digital geological compasses are widely being used with the help of three axis teslameter and three axis accelerometers. That’s right: They have an app for that! These compass programs use algebraic equations to find the orientation from accelerometer and magnetometer data. This allows quick acquisition of many measurements. Users can also save and edit different measurements in the software program. Of course, you should calibrate your smart phones and devices by matching their results to the analog compasses.

There are different names of geological hammer, such as “geologist’s hammer”, “rock hammer”, “rock pick” or “geological pick”. This hammer is used to check the rock hardness in the field, as well as splitting and breaking rocks in different ways. In the geoscience field, it is used for obtaining a fresh surface sample - to find its composition, nature, history and mineralogy. In the field of fossil acquisition and minerals collecting, it is used for splitting the rock surface into two pieces. This is for the demarcation of fossils inside them. This geological hammer is sometimes also used for scaling purposes, during photography of rock specimens in the field. The shape of the hammer is flat from one side and chisel from another side.

The hand lens is also an important geological field tool. It is widely used for the identification of minerals and the rock specimens. It is a small magnifying device that is used to view the rock features more closely. Generally, there are three main types of hand lenses which are given below:

These have highest degree of optical errors and lower magnification.

These have relatively higher magnification and lower optical errors.

These lenses use multiple prisms to change the perspective.

A newer version of the same concept is logging. Geophysical logging is an important part of any geophysical activity. For example, think about Borehole well logging equipment: It is often used to better understand the geology of an area, the fluid flow, and assess borehole integrity. Read more about Geophysical logging:

As technology evolves, it is used more and more in geoscience. Seeing tools such as the compass and field notes evolve in innovative ways is an exciting part of the world of Geoscience.